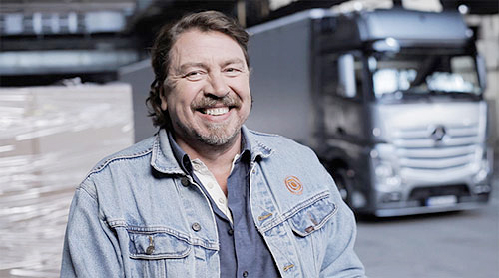 For over 100 years Mercedes-Benz has developed and produced trucks. The Actros is a technically highly advanced Long Distance Truck and was first introduced to the market in 1996.

In a nationwide online competition, Mercedes-Benz Trucks asked German truckers to send in the most memorable experiences they ever had whilst on ‘tour’. The best stories were interpreted by German actor Armin Rohde, in his very own down-to-earth and subtle way. The result – five brilliant short movies – was presented at the market launch of the new Mercedes-Benz Actros at events all over Germany. Furthermore the movies were broadcast on the campaign site: www.trucker-geschichten.de.

Spark brokered the deal between Mercedes-Benz Trucks and Armin Rohde, negotiated the details and set up the contract.

Kathrin Hauer-Heinemann, Account Director Hamburg commented: “Armin Rohde was the absolutely perfect fit for this project. Despite his success he has always remained the down-to-earth guy from next door. Recognized for his authentic style of acting, he has all the credibility needed to perfectly communicate with the target group of Mercedes-Benz.”