Sky is the leading pay-TV service in Germany and Austria with approximately 3.5 million subscribers. Since the launch of the Sky brand in July 2009, the company has significantly expanded the depth and breadth of its programme offering, launched many innovations and enhanced its customer service. The results can be seen in the company’s strong performance, with continuous operational and financial progress, as well as improvements in viewer ratings, value-for-money scores, customer recommendations and, most importantly, high satisfaction levels.

Spark was asked to negotiate the master and publishing rights for the song ‘I Will Sing’ by NEEDTOBREATHE on behalf of Sky Germany. The song was used in the background for a content campaign showcasing Sky’s football and new TV/Film content exclusively available on the Sky platform. 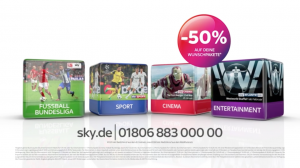 Spark identified the 4 rights owners for the song and negotiated the sync fee and agreements.

The campaign will run until the end of March 2017.