Events for German Ministry of Traffic, Construction and Urban Development 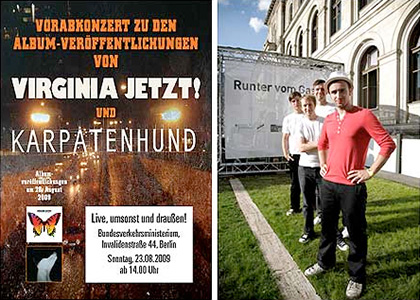 More than 5,000 people die every year in traffic accidents in Germany, and another 407,000 people are injured. The German Ministry of Traffic, Construction and Urban Development has made the reduction of those alarming numbers one of their key priorities. Their campaign against speeding on German roads, “Runter vom Gas” (“reduce your speed”) was launched in March 2008, directed specifically at teenagers. Part of the concept involves an annual public event named “Invitation to a State Visit” on the occasion of the annual open day of Ministries in Berlin. The public gets a chance to look behind the scenes of German politics. The challenge was to attract a younger audience – the main target group of the campaign – to come along to this event.

The PR agency responsible for the campaign, Scholz & Friends Agenda, briefed Spark to find an attractive live music programme and a comedy act. Spark engaged the well-established German soul singer Max Mutzke, who was involved as a passenger in a car accident that left one person dead in 2005, and the upcoming and critically acclaimed rock band Bakkushan. For the comedy slot Murat Topal, a former policeman from Berlin Kreuzberg, was the perfect fit. Spark coordinated interviews and the smooth running of the performances at the event.

Promotional poster developed by Spark, and Max Mutzke being interviewed by Thomas Rosch about road safety on stage.

Virginia Jetzt! and Karpatenhund, booked by Spark the previous year.