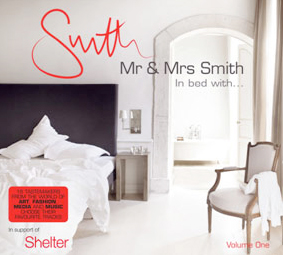 Spark released a CD in cooperation with Mr & Mrs Smith in support of homeless charity Shelter.

The result is a supremely seductive soundtrack, hand-selected by art, fashion, media and music luminaries, to raise funds for Shelter.

“We are very excited about teaming up with Mr & Mrs Smith to release this album in support of Shelter”, says Spark’s Managing Director of the London Office Matthias Bauss. “Mr & Mrs Smith (www.mrandmrssmith.com) fully understand the true value of music which is so important for any brand aiming at the lifestyle market. Besides music retail exploitation via our UK distributor PIAS UK Ltd, we are looking forward to marketing the CD to Mr & Mrs Smith’s club members and non-traditional outlets such as book shops and of course boutique hotels.”

‘After our ‘Something for the Weekend’ music series came to an end, we wanted to create a new compilation with a similarly eclectic track list, but through a more diverse and imaginative selection process. And the fact we can make a contribution to Shelter is close to all our hearts. As for the line-up, it is genuinely inspiring and we really don’t think you’ll find any other albums quite like it out there. A huge thank you to all involved.’ James Lohan, founder Mr & Mrs Smith.

‘It’s not everyday you are asked to get into bed with Lauren Laverne and Howard Marks. Mr & Mrs Smith asked some of our favourite bon viveurs to reveal their bedtime musical secrets and the result is a staggeringly enjoyable and wonderfully surprising romp through a genre-hopping array of the classic and the contemporary where Marc Almond, The Do, Neon Neon, Terry Callier and Television all turn out to be unpredictable but perfect bedfellows.’ Rob Wood, Mr & Mrs Smith’s Tunesmith/Music Concierge

‘What a fantastic set of tracks. I am thrilled to be involved – and how brilliant that a donation goes to one of my favourite charities, Shelter.’ Michelle Ogundehin, Editor-in-Chief, Elle Decoration