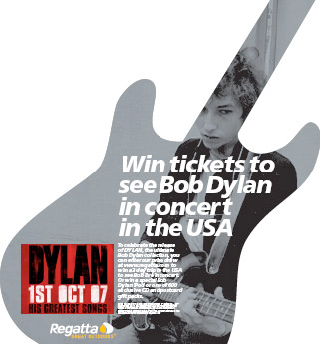 Spark approached Regatta in a bid to find an innovative way of promoting the new album, ‘DYLAN’, a collection of Bob Dylan’s greatest songs.

As part of the album launch, Regatta conducted a European-wide promotion through over 600 retailers. Bob Dylan fans were directed to the Regatta website through POS in-store for a chance to win a 3-day trip to the USA with 2 tickets to see Bob Dylan in concert. Runner-up prizes were 50 exclusive Bob Dylan iPods and 600 exclusive Bob Dylan CD/picture presentation packs. Some retailers gave away Bob Dylan CDs featuring 4 live tracks: Don’t Think Twice, It’s Alright; It Ain’t Me, Babe; Shelter From The Storm and Tangled Up In Blue with sales of Regatta clothing over £30/50€. 300 specially commissioned Regatta/Bob Dylan branded Softshell jackets were also used in the promotion as giveaways.

Extensive research revealed that Bob Dylan fans tend also to be fans of the great outdoors, and as such match the demographic of the Regatta consumer. Dylan’s record label Sony Music recognised that Regatta was the leading European outdoor clothing brand with an infrastructure that could really do justice to such a promotion.

Regatta MD Keith Black said, “We were surprised by the strong correlation between Regatta customers and Bob Dylan fans but are obviously delighted! Bob is an icon and to be associated with him is a real honour and a scoop for the brand. Our retailers are really backing the promotion.”