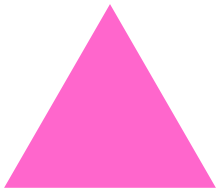 About the Pink Triangle Symbol:

In Nazi Germany, pink triangles were used as one of the Nazi concentration camp badges, used to identify male prisoners who were sent there because of their homosexuality. Every prisoner had to wear a downward-pointing triangle on their jacket, the colour of which was to categorise them by their “kind”. Other colors identified Jewish people (two triangles superimposed as a yellow star), political prisoners, Jehovah’s Witnesses, “anti-social” prisoners, and others the Nazis deemed undesirable. Pink and yellow triangles could be combined if a prisoner was deemed to be gay and Jewish.

Originally intended as a badge of shame, the pink triangle (often inverted from its Nazi usage) has been reclaimed as an international symbol of gay pride and the gay rights movement, and is second in popularity only to the rainbow flag.

Did you know that during the Nazi era 15,000 people were sent to concentration camps for same-sex love? Did you know that these people were labelled with a pink triangle and were even considered by other camp inmates as being inferior? Did you know that they often didn’t even survive three days in the camps? And did you know that some of those who survived remained imprisoned after the concentration camps were liberated because homosexuality – in both the Federal Republic of Germany and in Austria – was a prosecutable offense until the 1990s?
If this is all new information to you and you now want to take comfort in the fact that these stories remain a thing of the past, then the Pink Triangle campaign will, unfortunately, have to keep alarming you. Although civil partnerships and marriage for same-sex partners have become a reality in more and more countries, this is in many ways overshadowed by the truth that right now, in 2018, homosexuality is banned by law in over 70 countries, and in eight of these, is even punishable by death.

The Magazine VANGARDIST and the former German concentration camp KZ memorial Mauthausen cooperated together with the Serviceplan-Group to raise awareness in a global campaign for the persecution and the legal injustice against the LGBTQi+ Community. Supporters can add their voice through Facebook Connect with their Facebook profile. At end of the petition period the list of all supporters will be forwarded to the UNO to achieve a change in the human right charta.

Spark helped to secure German actress Ulrike Folkerts to support the cause by doing the voice over for the German version of the video. Like all parties involved Spark supported the charity free of charge.